Where to live in Surrey

Where are the best places in Surrey to live? The best place for a retired couple looking for quiet village might not be ideal for a young professional seeking a good commute and a choice of bars and restaurants on their doorstep.

Are you moving to Surrey or within the county itself and want to know where to live?

Here are some of the categories we’ve divided up the best places to live in Surrey by:

The best towns in Surrey

We’ve ranked the best towns to live in Surrey with our Locality Reality mapping tool, which scores postcodes based on seven key criteria, including education, safety, noise, grocery, lifestyle, public green spaces, and transport. All information is collated from over 70 publicly available data points. 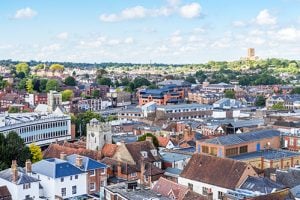 Guildford is the best place to live in Surrey

Commutable into London in under 40 minutes, Guildford is on the edge of the North Downs, while closer to home is the woodlands of Stoke Park and the quaint River Wey. Find out more about Guildford.

Rounding up the rest of the top ten:

6. Godalming (7.40) – this historic market town has good schools, lots of green space and is quiet in comparison to other towns in Surrey.

7. Banstead (7.11) – some call it a village, others a town, though it is a post town and on the high street there are enough coffee shops, restaurants, pubs and independent and chain shops to be a town – despite the town centre being referred to as Banstead Village.

8. Reigate (7.11) – many will be surprised this historic town in the Surrey commuter belt doesn’t rank higher with its choice of schools and restaurants, pubs and shops to go out to. For some it’s the best place to live in the South East.

9. Staines Upon Thames (7.02) – a town popular with commuters as it has decent public transport and plenty of local amenities, including a good choice of supermarkets, chain shops and restaurants, and pubs. Families also benefit from having Thorpe Park on their doorstep.

10. Weybridge (7.01) – a commuter town with green spaces aplenty, a good selection of schools and quality local amenities, including independent and chain shops and large grocers.

Where do you think is the best town to live in Surrey? Please do let us know in the comment section.

All of these places overall have a lot of benefits, but if you’re looking for something more specific, read on.

Find out how much a mortgage could cost you on your next property.

£1,001 per month
Check my affordability

Please be aware, your results are only an estimate and should not be considered as a mortgage quote.

Want no more than a 35-minute commute in to London from a Surrey town with a station? Here are the top five places (these are NOT the best commutes, but based on our Locality Reality mapping tool’s seven key criteria as stated above): 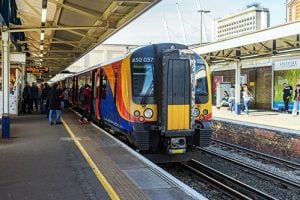 Woking is the best place in Surrey to commute from

The station has the choice of up to six services into London Waterloo during peak hours with journey times around 25 minutes. Similar to Worcester Park, residents can take a 13-minute train to Wimbledon for further connections.

Where do you think is the best place to live and commute from? Please do let us know in the comment section.

The best villages in Surrey

Naming the best villages in Surrey is very subjective, but here’s a run-down of the highest rated based on our Locality Reality mapping tool’s seven key criteria: 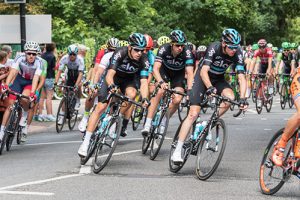 Unlike Knaphill, West Byfleet has a rail station with trains into London Waterloo taking around 40 minutes. On the River Wey, this commuter belt village has low crime rates and has plenty of public green spaces for good walks. In the centre of West Byfleet is a good selection of shops, restaurants, pubs, a Waitrose supermarket, and its own golf club.

Please do leave us a comment and tell us about your favourite village. 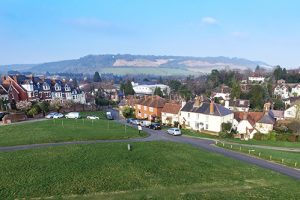 Dorking is the seventh best place in Surrey to live

Many people reading this will likely disagree on the best or nicest place to live in Surrey. Ultimately, it’s a subjective choice. It’s one often based on personal connections to an area or often whether a place is picturesque and quaint.

However, if you’re looking to move somewhere you’re not familiar with, using data can be incredibly helpful for creating a shortlist of places to see in person.

How can OneDome help me move to Surrey?

We are the first property website in the UK capable of completing the entire homebuying journey. From finding a home in Surrey and getting a mortgage, through to completing the legal steps necessary to buying or selling a home, OneDome does it all. We’ve moved the homebuying process online, which means your paperwork, trips to the post office, and phone calls are all dramatically reduced. Our platform helps speed up transactions as well. It does this by helping all parties involved track the progress of the home purchase in real time, so sales are completed quicker and home movers can buy or sell a property faster than through traditional methods.

OneDome, everything you need to complete your move.

Looking for a property?

Enter a location and browse thousands of properties from some of the country’s leading estate agents:

Enter a location and browse thousands of properties to rent from some of the country’s leading estate agents:

Enter your property’s postcode to compare reviews, fees, and performance of estate agents: 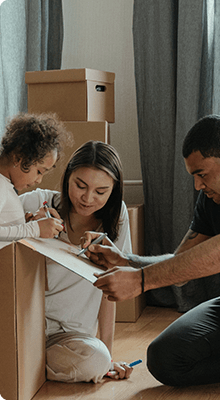 Save £1,000 with our HomeBuyer Service

Find out more
Go to Top